The Whynter Elite ARC-122DS is a portable air conditioner that has received an overwhelming number of positive comments from customers. At first glance, it looks like any portable AC you’d find online, and for the most part that’s true, but that doesn’t necessarily mean it’s not worth considering. If your home doesn’t have a centralized cooling system and you need something to take with you from room to room, perhaps the Elite ARC-122DS could be the ideal choice. 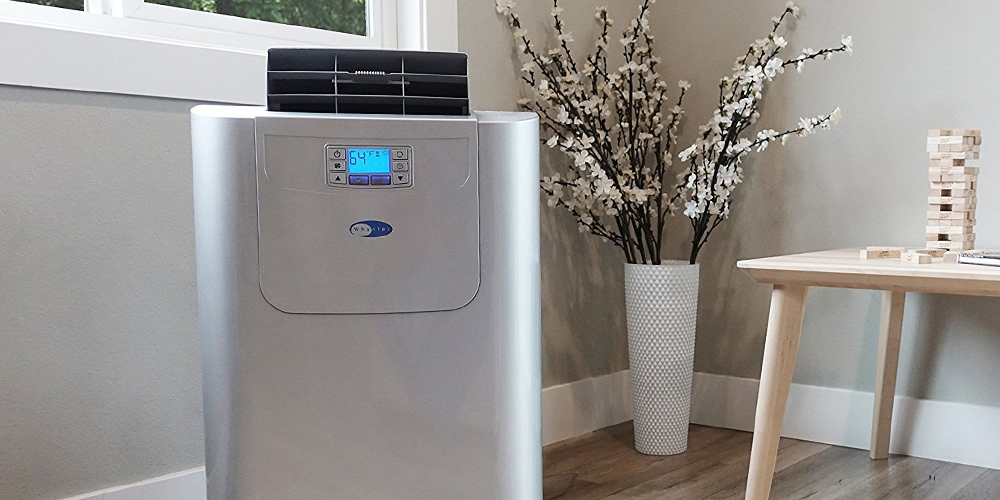 The temperature range of the ARC-122DS is the standard 61° to 89°F (roughly 16° to 31°C) to create a comfortable indoor living environment during the middle of the sweltering summer months.

Temperature input and the timer function can be changed either by pressing buttons on the portable AC’s control panel or by playing with the included remote control (batteries not included).

The 12,000-BTU ARC-122DS is designed to decrease the temperature in rooms of up to 400 square feet. This is not the largest portable AC you’ll find by far, but for the average bedroom, kitchen, media room, and home office unit, this is more than enough power than you may need.

The ARC-122DS uses a dual-stage filtration system that consists of a washable pre-filter and an activated carbon filter. The pre-filter serves to trap large particles from outside and stop them from entering into your home.

The activated carbon filter snatches odor molecules from kitchen experiment fails and pets (to an extent). These filters aren’t the most advanced, but by portable air conditioner standards, they work just fine.

A feature that makes the ARC-122DS stand out from the vast pool of portable ACs is its dual hose design.

This eliminates the presence of negative air pressure commonly found in single-hose setups, thereby preventing warm air from the outdoors or other rooms to leak into the space where the ARC-122DS is installed.

I touched on the timer function earlier, but let me explain it in greater detail. The ARC-122DS has a 24-hour programmable timer that can be set up to turn on at a certain time or turn off after several hours of use.

Your home can be as cool as a cucumber before you walk in, and it also saves energy by automatically shutting off when you don’t need it.

Moisture is the sworn enemy of all cold-lovers across the world. To properly reduce indoor relative humidity, you’ll need to rely on a dehumidifier to condense moisture particles – or you could get the ARC-122DS that has a built-in dehumidifier that gets rid of 76 pints of moisture per day.

Removing accumulated moisture can be done automatically by connecting a drain hose to get rid of most of the moisture (evaporation should do the rest) or manually emptying out the reservoir.

On high speed, the ARC-122DS generates a moderately low 52 decibels of noise – about the same volume as common household background noises.

This may seem a bit excessive, but remember: portable ACs are notorious for their high noise output. In fact, at only 52 decibels, the ARC-122DS can be categorized as a “quieter” model than most.

Don’t be fooled by the unassembled air conditioner when you open the box. The instructions manual is actually quite easy to follow – a surprise compared to a number of different brands – and the device can be set up in, based on customers’ experience, less than 30 minutes on average.

The biggest obstacle you may run into is setting up the window vent properly so outdoor air doesn’t seep in. The included window vent kit is 6-1/2 inches wide and 20 inches long (extendable to 40 inches). Depending on the size of your window, you may need to purchase an additional window kit (sold separately).

Despite being a “portable” air conditioner, portability is actually one of its weakest points. Weighing in at a sliver over 60 pounds, the ARC-122DS can be quite tricky to lift up and down stairs.

Plus, there aren’t any side carry handles; all you have for grip is a smooth, shallow groove that can be quite slippery. I’d recommend getting a second pair of hands to help transport the unit across different stories. As for horizontal movement, the rolling casters work as intended.

Overall, the Elite ARC-122DS from Whynter is an excellent portable AC. The only downside I could find is, ironically, its portability due to its weight and lack of carry handles. Everything else, from its unique dual-hose design to its quiet operation, makes this a worthy investment for the upcoming summer months.