If you’re in the market for a portable washing machine, you’ll want to see how two of the most highly rated models compare in a head-to-head battle. In today’s battle royale, we’re pitting the Think Gizmos up against the Giantex Portable Twin Tub to see which of the two comes out on top.

Portable washer machines are portable for a reason: their max loads are only a fraction of what you’d get in a full-sized model. The Think Gizmos is a twin-tub portable washer machine where the washtub can hold onto eight pounds of clothes at a time and the spin tub is capped at 4.5 pounds.

Both the Think Gizmos and the Giantex have dials on the control pad to adjust wash and spin times to 15 minutes and 5 minutes. Because of their smaller tub capacities, the maximum amount of time should be able to get rid of most stains in a single cycle.

Portable washer machines need to be as compact as possible to make traveling easier on the user. The Think Gizmos takes up only about 24 x 15 inches of floor space and stands 27 inches high. It’s pretty compact and should make finding a place to keep it in your RV or truck pretty easy, but as you’ll see later on in our comparison, the Giantex is considerably more space-efficient.

With compactness comes lightweight, in most cases. At least this is true for the Think Gizmos without water or clothes in the tub, which weigh only 27 pounds. Even though it’s not as heavy as other portable washer machines, it still may require an extra set of hands to safely lift and move the unit. The Giantex is only about three pounds heavier than this one.

Now onto what matters most: how the Think Gizmos performs. Portable washing machines aren’t nearly as thorough at washing loads of laundry as full-sized models, but they get the job done eventually. The Think Gizmos is no different—it can require multiple 15-minute wash cycles to remove stains from clothing in normal wash mode. This can be a pain, but it’s completely unavoidable.

The Giantex is a slightly larger yet still portable washing machine with an 11-pound washtub and a 6.6-pound spin tub. What’s great about the Giantex is that even though it can hold about 33% heavier load than the Gizmos, it does so while also being near as compact (24.8 x 15-inch footprint at 28.5 inches high).

Portable washing machines are pretty straightforward appliances with very few dials and buttons, and the Giantex, as well as the Think Gizmos, is no exception. The three dials adjust wash time, wash mode (between soft and normal), and spin time. On the left and right sides of the control panel are two water inlet ports. You just plug it in, dump your clothes in, twist the dials, and wait until the timer expires. Easy peasy.

Portable washers come with smaller motors that consume less power compared to their full-sized counterparts. The Giantex consumes 260 watts and 110 watts for washing and spinning respectively, whereas the smaller Think Gizmos uses 230 watts and 100 watts to wash and dry. Both models are considered energy-efficient but the disparity is due to their different-sized tubs.

Lint filters are tiny objects that you place inside of the wash tub to remove lint and stray fibers. They’re not 100% foolproof, but they do make washing clothes a bit easier and less stressful. The Giantex doesn’t come with lint filters but instead relies on a side filter net to trap string, lint, and the like. The Think Gizmos, on the other hand, includes a free lint filter.

Finally, onto how the unit performs. It can be argued that the Giantex’s larger washtub and same 15-minute wash cycle can lead to poorer stain removal compared to the Think Gizmos, but thankfully, this is not the case. This machine performs just as well as the Think Gizmos and requires multiple cycles to begin removing stubborn stains.

Think Gizmos vs. Giantex: And the Winner Is…

*Drumroll* Neither. It’s pretty much a tie. The Think Gizmos TG23 and the Giantex Twin Tub are identical where it matters the most: cleaning performance. If you’re looking for the largest, space-efficient portable washer machine, then the Giantex is hands down the better of the two. In every other regard, you might as well close your eyes and pick. 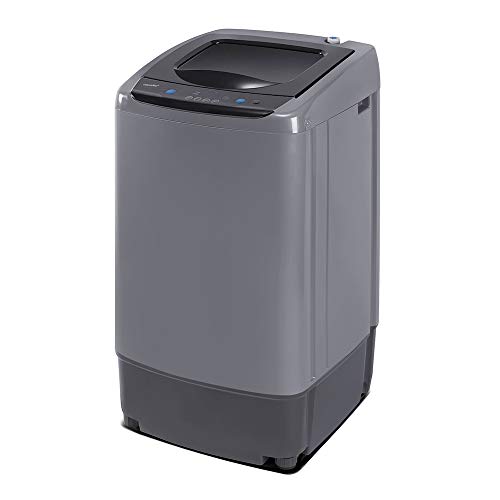