As dangerous as overly humid homes can be, a lack of humidity can lead to much more severe health problems. Our bodies are made almost entirely out of water, and we expel moisture through simple actions like breathing and talking. If you aren’t properly hydrated, your sinuses, throat, eyes, and skin will suffer. With a handy humidifier on your desk, you won’t need to worry about these problems at all. 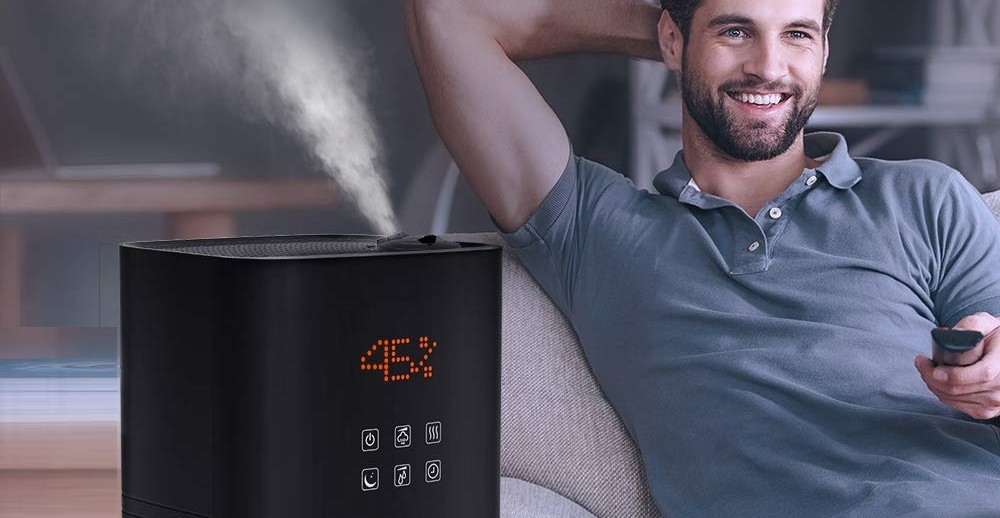 TaoTronics humidifiers have become increasingly more popular as of late. Three of their devices – the TT-AH018, TT-AH024, and TT-AH025B – have garnered a considerable number of thumbs-up from customers and industry experts alike. But what makes them so great? And more importantly, which of the three deserves a spot in your home? This article aims to find out by putting the three in head-to-head combat of specs and features.

TT-AH018
The first thing worth considering when shopping for a humidifier should be how wide of an area it can humidify. The TT-Ah018 can humidify rooms as large as 450 square feet. This is by no means the largest humidifier available, but that’s plenty of capacity for bedrooms, workshop garages, and kitchens.

Conclusion: The difference between room-humidifying capacities of these models is minuscule. However, like most home appliances, bigger is almost always better, so the TT-AH018 would most likely the best option for small- to medium-sized rooms.

TT-AH018 and TT-AH024
The maximum height of the mist is a good indicator of how efficiently the humidifier can spread moisture, though you still need to keep their maximum area coverage ratings into account. These two humidifier models blast mist out at a height of up to two feet.

TT-AH025B
The TT-AH025B has a slightly higher mist reach of a little more than three feet. For a slightly smaller humidifier, its three-foot reach is quite amazing. When put head to head with the other models in identical situations, the TT-AH025B should have a better chance humidifying a room more quickly than the rest.

Reservoir Capacity and Runtime per Refill

TT-AH018
Humidifiers come with differently sized reservoirs based on how large or tiny the unit is. In general, a larger reservoir is preferable since users won’t need to refill it with water as frequently. The TT-AH018 can hold onto as much as 5-1/5 liters of water at any given time.

TT-AH024
This humidifier has a smaller basin. The maximum amount of water this unit can hold is 4 liters, a full 20% less than the TT-AH018. However, less is not always bad as you’ll see later on.

TT-AH025B
The tiny TT-AH025B surprises us yet again with its humungous reservoir. This device’s misleading body can hold up to 6 liters of water at full capacity.

Conclusion: Since there’s no reliable way of refilling a humidifier without spilling water all over the place, a larger reservoir is also the sought-out option for its added convenience. However, the “convenience” of a bigger basin is relative to how much water the device uses per hour, which you’ll find out next.

TT-AH018
The great thing about most modern humidifiers is that they allow you to choose how much moisture to spread into the air. A variable mist output feature gives users full-control in setting up ideal humidity levels. The TT-AH018 has three speeds that release between 60 and 300 mL of water per hour. The maximum runtime per full reservoir is 45 straight hours.

TT-AH024 and TT-AH025B
Like the TT-AH018, the TT-AH024 and TT-AH025B give you the option to control how much or how little moisture to introduce into the air. However, there are no preset output levels; instead, these devices come with a dial that you turn to choose your desired mistiness. Both of these devices can blast out between 60 and 300 mL of water for up to 50 hours.

Conclusion: Although all three have the same 60- to 300-mL output, the TT-AH018’s preset output speeds are more precise with their mist levels and, combined with the reservoir volume, has a reduced runtime of 5 hours. The other two models have the same dial, output range, and runtimes. However, the only way for the TT-AH024 to reach the 50-hour mark is by running it at its lowest speed due to its tinier 4-liter basin.

TT-AH018
One of the greatest things about the TT-AH018 is that it comes with an optional temperature control feature. A built-in heater warms the mist as it blasts out of the nozzle, warming up the room to a toasty temperature during the winter. This device has three heating options: 104°F, 122°F, and 140°F. Please keep children away from this humidifier when the heater is activated.

TT-AH024 and TT-AH025B
Neither of these two humidifiers have a temperature control option. The warmth of the mist depends entirely on the temperature of the water poured into their reservoirs. If you’d like warmer mist during the wintertime, run warm water (up to 140°F) into the basin. Anything hotter might cause damage to the nozzle.

Conclusion: The benefit of having a humidifier designed to shoot out warm moisture particles into the air is that everything about the unit is made to withstand heat. With the TT-AH024 and TT-AH025B, you run the risk of damaging parts of the humidifiers by attempting to use hot water. 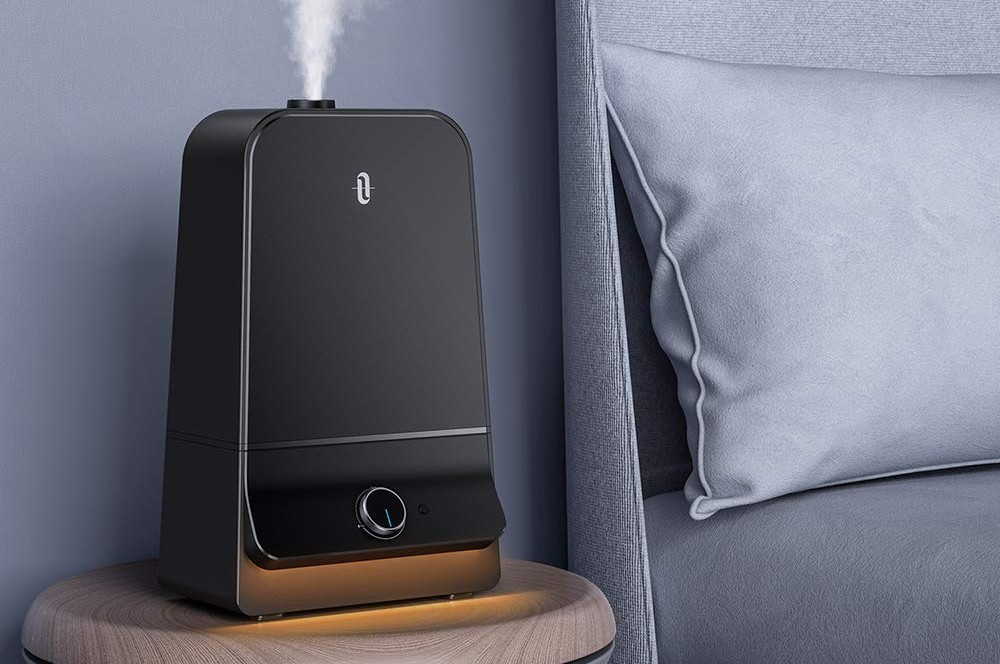 TT-AH018
The TT-AH018 is a newer model compared to the other two humidifiers, so it’s not surprising that it comes with all the bells and whistles. This humidifier’s control panel lets you control how humid you’d like your room. By pushing a few buttons, you can configure the device automatically shut down when a room reaches a relative humidity of anywhere between 40% and 95% at 5% increments.

TT-AH024 and TT-AH025B
Neither of these devices are as state-of-the-art as the TT-AH018, so there’s no added convenience of an auto-start feature, a humidity gauge, and humidity presets. You’ll have to tamper with the dial when the room gets too humid.

Conclusion: It goes without saying but having full-control over how a humidifier performs is a lot better than playing the guessing game. It’s not that the TT-AH024 and TT-AH025B don’t give let you control how it works, but they don’t have humidistats or desired relative humidity levels.

TT-AH018, TT-AH024, and TT-AH025B
Even though the TT-AH024 and TT-AH025B are missing a lot of features, it does not lack all the safety measures to ensure a longer life expectancy. All three of these devices are equipped with low-water sensors that will hit the kill switch when their reservoirs are low on water. They also have heat protection and a toppling sensor to prevent dry burns and spills.

TT-AH018, TT-AH024, and TT-AH025B
The final feature we’d like to talk about is the 360° rotatable nozzle. They’re probably not what you imagine though. You have to manually turn the nozzle to redirect the mist to the desired spot of a room. These nozzles have two latches that lets the humidifier fire mist in two opposite directions.

So after comparing the three TaoTronic humidifiers, which do we think deserves the title of the “best of the bunch?” Hands down, the crown goes to the TT-AH018 Humidifier.

Despite having a smaller reservoir than the TT-AH025B and reduced runtime compared to the other two models, the convenience-adding features (humidistat and preset relative humidity levels) set it apart from the rest. Also, we can’t forget about the awesome temperature control feature that lets you humidify and warm up a room during the frigid winter months. This feature alone, in our opinion, is why the TT-AH018 deserves the number one spot on our list.

Now, when looking at the TaoTronics TT-AH024 and TT-AH025B, the latter is awarded the silver medal due to its awesome 3-foot mist height. Although both devices are built to humidify similarly sized rooms, the TT-AH025B will do it much more quickly thanks to its enhanced mist-blasting power.

However, if we were to consider these humidifiers individually, we’d say that any one of them could easily become a beloved appliance for bedrooms, home offices, and living rooms. The humidifying efficiency of these devices sets it worlds apart from many comparable humidifiers from more popular brands.

Shop the Best Humidifiers on Amazon >>>