Owning a pool is great and all, but how many times have you been stuck having to pick up the debris and scrub off algae from the base and lines on your own?

Sure, you can hire a pool boy to do it for you, but based on what we’ve seen in movies, that’s just an invitation for trouble, but with your very own robotic pool cleaner, you won’t have to worry about cleaning the gross piles of algae off your pool.

There’s one Maytronics robot model that outshines a lot of what you’d find: the Dolphin Mercury. This intelligent piece of machinery will do your dirty work for you, giving you more time to enjoy swimming in your pool rather than skimming it. Let’s take a closer look at what the Dolphin Mercury is programmed to deliver.

After putting the Mercury through the ropes, it’s safe to conclude that this compact piece of pool-cleaning technology is befitting of the Maytronics name. There’s absolutely no 50-foot in-ground swimming pool that the Mercury can’t clean.

The Mercury comes with both front and back scrubbers—the front are motor-driven and actively brush away at any surface it makes contact with.

The scrubs on the backside move with the tracks to loosen debris, leaving the powerful inlet to handle the rest. The scrubbers work beautifully at removing caked-on algae and dirt piles on the base and walls of any in-ground pool.

The CleverClean Navigation system relies on multiple sensors that scan its surroundings in order to produce an accurate digital layout of your pool’s floors and walls. By accessing this map, the Mercury creates the most efficient cleaning path to make the best use out each second spent underwater.

However, it’s not 100% foolproof (no smart navigation system is). It has a difficult time identifying steps and maneuvering up them due to the sudden change in terrain. This means you’ll still have some manual scrubbing to do (but not too much).

One of the Mercury’s most prominent features is its ability to clean the waterline of your pool. How effective a robotic pool cleaner is has a lot to do with how clean your pool appears from above. The Mercury uses a series of jets combined with its grippy tracks to move vertically and latch onto slippery walls.

This ultimately allows the robot to clean the waterline of your pool, giving it a healthy shine and particle-free appearance from the surface. 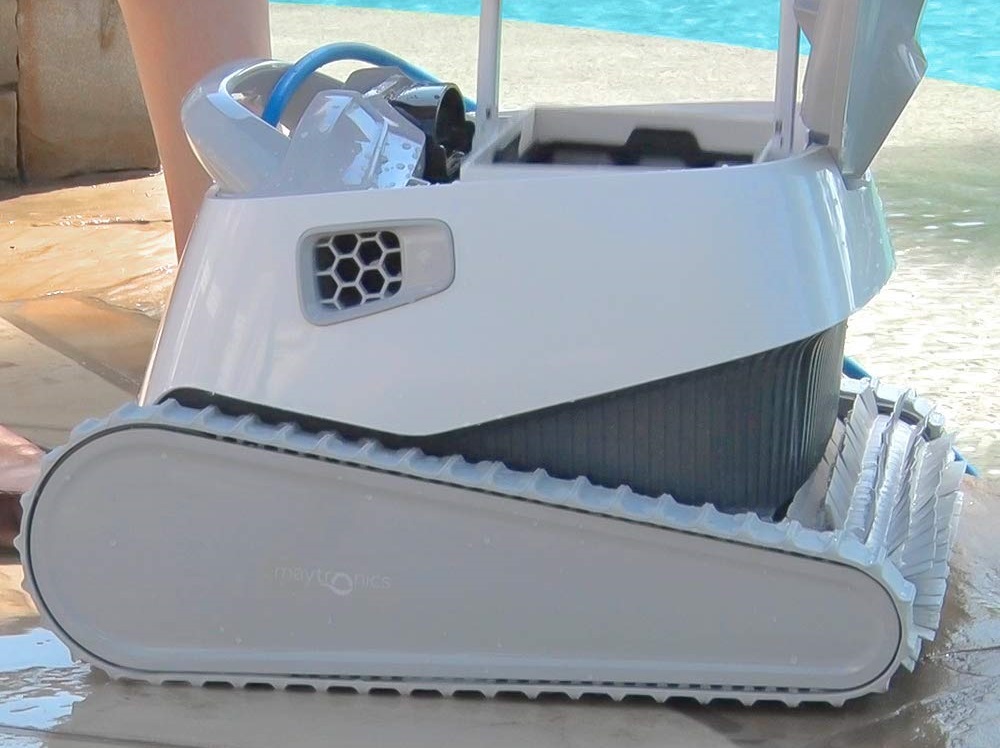 Like all modern models of the Dolphin series, the Mercury cleans your pool by passing a tremendous amount of water per minute through two filters—one for fine debris and the other for ultra-fine. Both baskets are accessible from the top of the Mercury to make cleanup a breeze.

To get to the filter basket, all you need to do is lift the latch is pull the filters out. A quick rinse with a garden hose will remove all of the dirt and debris the mesh in preparation for another underwater cleaning cycle.

It’s not a Dolphin device if it doesn’t have an anti-swivel cord. The magic behind this cord is that it can rotate up to 360° to prevent the inner wires from tangling or snapping. 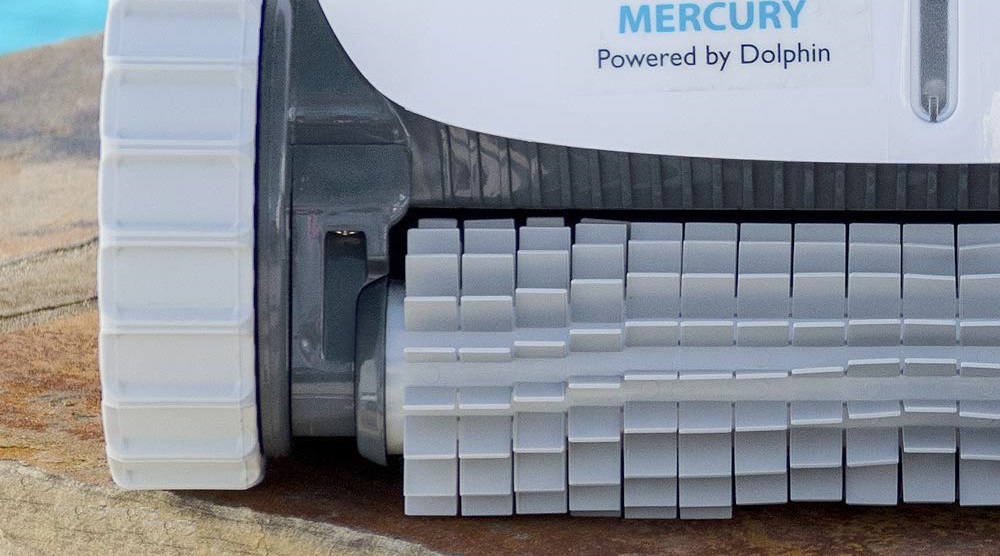 This allows the Mercury to move uninhibited across 50-foot pools and provide maximum coverage without choking itself in the process.

The Mercury comes with two different cleaning modes: quick and standard. The difference between the two is how long the robot spends cleaning. In quick mode, the Mercury will scrub away for an entire hour, whereas standard cleaning mode forces the Mercury to work for two hours continuously.

It’s nice that we can how long the robot works underwater, but for pools of 40 feet or longer, even 120 minutes isn’t going to be enough time. You’ll need to run the robot twice or even three times for it to cover every single inch of your pool.

Which is why users will appreciate that the Mercury can connect to your smartphone via Bluetooth.

By using the downloadable app, you can send start and stop instructions to the Mercury from afar, as well as set up a weekly cleaning schedule so you don’t need to constantly monitor its cleaning status. There’s even manual steering with the app, but the controls are awkward at best.

Verdict; Should the Dolphin Mercury Clean My Pool?