For 40-plus years, Pentair has been on top of the pool cleaning game by making affordable but reliable pool cleaners. Today, we’re going to take a look at one such pressure-side pool cleaner—the 360228 Kreepy Krauly Racer—that has amazed pool owners since its release in mid-2018. Read all about the Racer below to see whether this model belongs in your pool.

Pressure-side pool cleaners are different from robots by how they don’t have electric motors but instead run on the pressure and waterflow produced by booster pumps. The Racer takes high-pressure jets and sends water through four separate outlets to give it an extra boost for better and quicker maneuverability underwater.

Additionally, with four jets working together, the Racer is able to scale walls and even transition seamlessly from wall to staircase without tipping over. Not a lot of robots can say the same thing so the Racer definitely has the upper hand here.

One of the first things you’ll notice is two oversized front wheels and two tiny rear ones. Unlike three-wheel models, the Racer’s four wheels allows for better movement in and around pools without dipping to the side. This keeps the suction throat at a steady level throughout the cleaning cycle which ensures better cleaning performance.

The front wheels are coated in Steady-Grip Traction. Grippy tires means enhanced wall-scaling ability as well as better movement on all floor types (concrete, vinyl, and so on). With this setup, the Racer moves consistently well to clean all four corners or every sloped edge of your pool.

Located at the front of the Racer is a built-in, front-spinning brushroll that scrapes stubborn dirt and algae piles clean off of your pool’s lining before being suctioned away. This brushroll works well on all pool types but exceeds expectations on concrete. There have been claims that the brush scrapes and scratches vinyl, but we have yet to find truth to these complaints.

However, even though the Racer is able to scrape away large dirt patches and accumulated algae, it doesn’t do particularly well at thinner piles, and even at its maximum suction power, it does tend to miss spots from time to time.

Compared to other Pentair pressure-side pool cleaners, the Racer has a 40% wider intake throat that lets leaves, twigs, acorns, and other large-size debris flow effortless through the unit before ending up inside of the oversized debris collection bag.

The only downside is the lack of pressure per square inch of contact which may actually contribute to its lackluster abilities at removing smaller dirt piles. Overall, this is by no means the end of the world, but it may mean having to manually scrub particularly dirty spots before the Racer is able to clean.

But here’s the thing: the Racer isn’t just all wheels and a large suction intake. On the rear of the unit is a Sweep Tail which does exactly as its name suggests—it sweeps. Water flowing through the tail can dislodge thinner algae piles of algae to give the Racer a better chance at cleaning it up.

However, the Tail is not powered by anything besides raw waterflow pressure so it’s pretty much hit or miss, but if you run the pool cleaner long enough, it’s bound to hit the mark at some point. Whether you want to bet on chance is entirely up to you.

A one-of-a-kind feature found in the Racer is the built-in Night Cruize LEDs that shine a bright light to let you see what sort of debris you’re working with at nighttime. Although it’s totally unique, we had to ask ourselves why in the world a robot without sensor technology needs lights?

Admittedly, watching the robot go to work at nighttime is a pretty cool scene, and it does allow you to see where piles of dirt are accumulated whenever the robot goes nearby, but other than that, it serves no purpose. Even the paperwork tells you not to worry if the lights aren’t working; they do absolutely nothing to increase cleaning performance and underwater maneuverability.

Verdict: Should I Get the Pentair 360228 Kreepy Krauly Racer?

The Kreepy Krauly Racer is a pretty awesome pressure-side pool cleaner that should run off of any booster pump you have provided you use the correct fittings. The quad-jet system paired with front-wheel drive keep the device moving constantly to clean a wider surface area for every second it spends submerged. 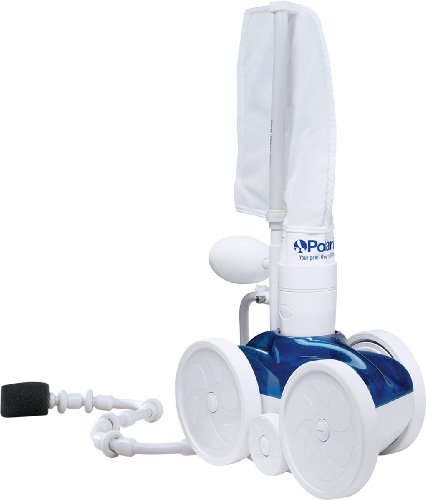