Fortunately, though, the good robot vacuums far outweigh the bad ones. But, a lot of people think that good robot vacuums are only confined to a few specific brands. Namely, the biggest manufacturers that are out there, where you will be paying a pretty hefty chunk of change for one of their robot vacuums.

Neato Robotics and Roborock aren’t as popular as many of the other manufacturers. With Roborock, a lot of people have heard of them, but not many people seem to buy them. And, with Neato Robotics, they aren’t that popular at all.

What Does The Neato Robotics D7 Offer?

The Neato Robotics D7 is an exceptionally powerful robot vacuum that has a litany of excellent features.

One of these features is the two-hour battery-life, which is pretty good for a robot vacuum. Especially for one such as this, because the Neato Robotics D7 offers a great deal of power and efficiency. Much more than you’ll find in the majority of robot vacuums, and as such, it must be noted that if you need something that is exceptionally strong and powerful, the Neato Robotics D7 is a great choice

When the Neato Robotics D7 is vacuuming, it uses laser technology to navigate. By doing this, it is able to create a precise and detailed map of your home, and then, instead of moving in random patterns, it knows exactly where it is going, and which spaces are especially dirty and especially nasty, so that it can then adjust itself to properly clean those particular spaces, which makes the cleaning process quick and easy, as well as thorough and more than efficient.

Since this map is being created, using the lasers, you can then use the app that the Neato Robotics D7 uses, and this will allow you to tell the D7 where it can clean, and where it can’t, which forces it to do some very thorough cleanings within the spaces that you have delineated.

You can also use the app to create custom schedules for the vacuum cleaner and to adjust the cleaning mode that is being used, during the cleaning process.

As for the performance of the Neato Robotics D7, it’s quite good, because the brushes are strong and they can easily brush up dirt and dust, as well as smaller pieces of debris. And, the motor that supplies the suction necessary to remove all of this dirt, dust, and debris is good, too. You can use “Turbo Mode” for extra speedy cleaning. In general, though, you won’t have any issues vacuuming on carpets and rugs, as well as floors made of things like wood and stone and tile, as well as other hard materials.

Ultimately, if you are willing to pay a decent chunk of change, the Neato Robotics D7 is easily one of the very best robot vacuums on the market, and this is due to the insane amount of power and efficiency that it provides, as well as the level of control it gives you over how it cleans, and where it cleans.

What Does The Roborock S5 Offer?

The Roborock S5 isn’t just a robot vacuum. It’s also a mop. Both the robot vacuuming system, and the mopping system, are well-designed and you can use them very easily, and the results that they bring are fantastic.

If you are using the mopping system, then water is drawn out of a little container that you place into the Roborock S5, and this water is then gently applied down on the floor, and this water loosens up the dirt and dust on hard floors – not carpets or soft floors. As this water is applied, the Roborock S5 moves over the water, allowing the vacuum to vacuum up the dirt and dust that was loosened up by the water, but, along with that, the mopping system also removes some of the stains that were on your floors, as well.

It’s a simple mopping system and, in truth, it isn’t particularly elaborate, but it does work well and, for smaller cleanings, it is quite useful. But, it is, by no means, a replacement for your regular mop.

As for the vacuuming system, which is the most important part, since this is a robot vacuum first and foremost, it’s incredibly efficient. You are using 2000Pa of suction, and this is a lot of suction for a robot vacuum. Using this suction, you can vacuum on carpets very easily, as well as hard floors and other types of surfaces. You’re not going to have any difficulties with that, and this is due to the suction, which allows for dirt and dust to easily be sucked into the vacuum, but it’s also due to the different cleaning modes you have access to.

By pressing a few buttons – this can be done using a remote control or your smartphone – you can choose which surface you need to clean, and what suction power is needed for that.

You can also use your smartphone to tell the Roborock S5 where to clean, what cleaning mode it needs to use, to turn on or off, to recharge, and to adjust the schedule.

At the end of the day, if you want a robot vacuum that is incredibly versatile, in terms of the features, while also being very strong and efficient, then the Roborock S5 is a fantastic choice! 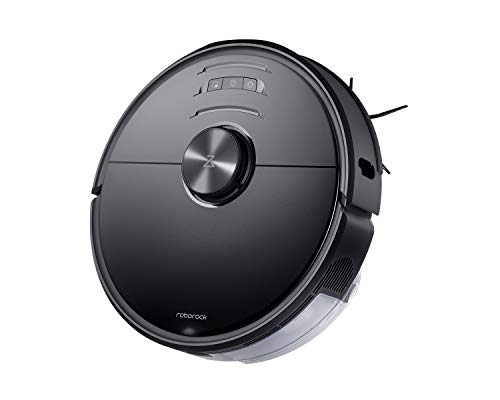