When it comes to your family’s health, it’s what we can’t see that’s the most worrisome. Microscopic airborne pollutants like pollen, dander, and viruses float freely in the comfort of our homes without a care in the world, but with an air purifier, the quality of your indoor air will improve dramatically.

Today, we’re going to take a look at three air purifier models from the same company: the Medify MA-14, MA-40, and MA-112. Their customers have a lot of good things to say about each of these purifiers, but when shopping for the “best” Medify, which should you get? Let’s find out together.

MA-14
This is one of the most important considerations to make when shopping for an air purifier. The M-14 is designed for smaller rooms due to its limited capacity of 117 to 470 square feet at most. The smaller the room, the more air it can move per hour.

MA-40
The MA-40 offers more than double the coverage of the MA-14. With a maximum rating of 1,300 square feet, the MA-40 will feel at home in living rooms, kitchens, garages, and home offices. However, in rooms of under 400 square feet, you may find the MA-40 a bit too noisy on its higher fan speeds.

MA-112
The MA-112 is a tank of an air purifier. This model can filter the air in rooms of up to 3,700 square feet, making one unit more than adept at handling an entire apartment unit on its own. The minimum recommended room size is 800 square feet, but the MA-112 might be a bit overkill for such tiny spaces.

Conclusion: Only you, the customer, can decide whether the MA-14, -40, or -112 is the ideal air purifier for your home, apartment, or room. It never hurts to go bigger than necessary, but going overboard might cost you a fortune in electric bills.

MA-14
More of a convenience feature than anything, a built-in particle sensor will allow you to leave the air purifier running all day while wasting very little electricity. Unfortunately, the MA-14 does not have a particle sensor, so users will need to manually flip between fan speeds.

Conclusion: Although particle and air quality sensors are neat, they’re not an absolutely-must-have feature in an air purifier, especially considering the size of the MA-14 and where it’ll be placed. However, for larger rooms where the MA-40 and -112 work optimally, these built-in sensors make these appliances self-reliant and low maintenance. 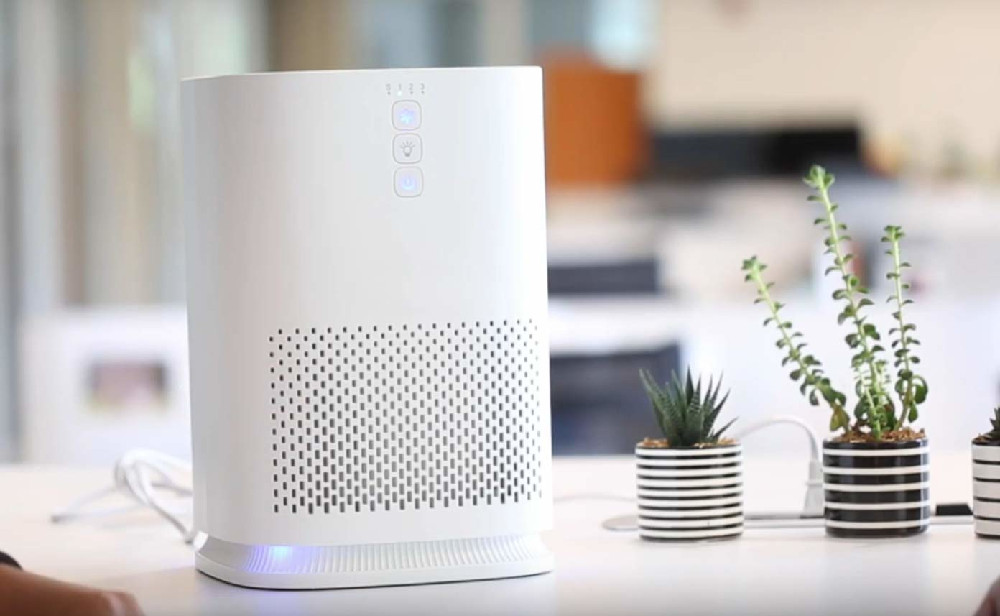 MA-14
MA-14
The number of fan speeds is important when choosing an air purifier – faster speeds make for faster cleaning of larger spaces, while a slower speed will keep noise levels at a minimum. The MA-14 comes with three fan speeds and sleep mode. Users need to manually select between fan speeds.

MA-40 and MA-112
The MA-40 and -112, as larger models, offer four different fan speeds as well as sleep mode. The addition of a fourth speed offers more flexibility when jumping between fan speeds. Plus, it may save you a couple of dollars annually on electricity since it may not need to activate the highest fan speed as often.

Conclusion: Although the number of fan speeds isn’t nearly as crucial a factor as, say, area coverage, it’s still worth considering if you plan on running the air purifier 24/7. However, when taking size into account, it makes sense for the MA-14 to have fewer fan speeds than the larger, more power-demanding Medify MA-40 and MA-112.

MA-14, MA-40, and MA-112
Any air purifier worth mentioning should have a True HEPA Filter – the only type of filter that’s able to remove microscopic pollutants and allergens (as small as 0.3 microns) from the air with an effectiveness of 99.97%. If you suffer from seasonal allergies or your sinuses are particularly sensitive to floating particles, then you’ll be happy to learn that these three Medify air purifiers are equipped with HEPA filters for maximum cleaning.

MA-14
Air ionizers statically charge airborne particles to make them latch onto filters more easily. The MA-14 doesn’t have an ionizing feature which isn’t a bad thing at all, considering all the flack ionizers have been getting recently.

MA-40 and MA-112
The MA-40 and -112 do. Air ionizers also make trapping odor molecules much easier, leaving a fresh smell in the room after a thorough cleaning. The best thing about their ionizers is that they do not produce ozone at all – a harmful lung irritant that, in large amounts, can cause long-lasting damage to your respiratory system. However, we would still recommend only turning this optional feature on when your house is empty.

Conclusion: With or without an ionizer, these Medify air purifiers work like a charm when placed in the right spaces. It makes perfect sense for the larger MA-40 and -112 to have ionizers since they’re built to clean the air of large rooms like kitchens and garages where foul odors are more common. 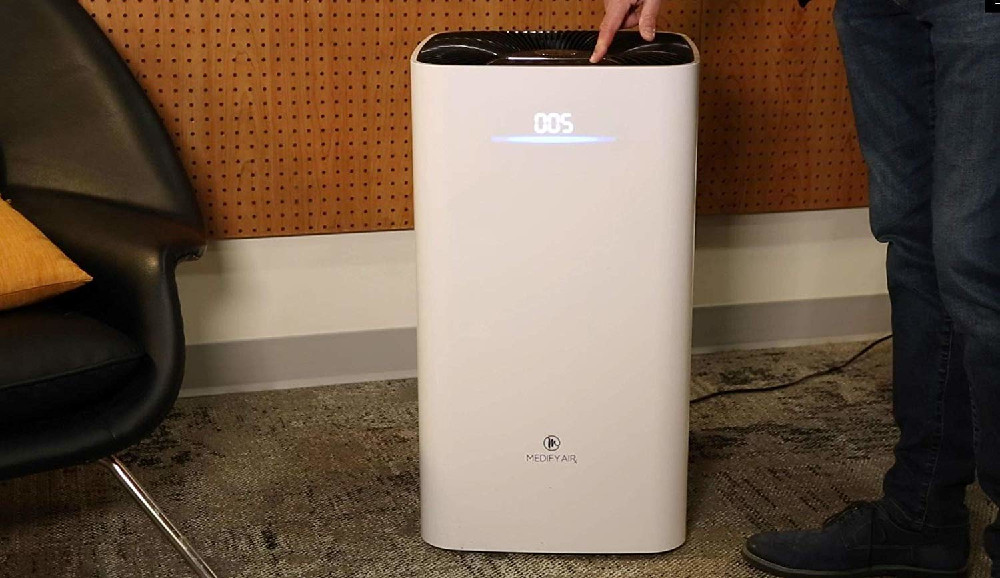 MA-14
The MA-14 is without a built-in timer, meaning that you’ll either need to constantly babysit the air purifier to ensure it doesn’t “over-purify” a room (which is not something to worry about) or turn it off manually when not in use. This may seem like the MA-14 isn’t a convenient air purifier, but it’s not that bad.

MA-40 and MA-112
The MA-40 and MA-112 are equipped with timers that can run for a maximum of 8 hours. This is extremely important when running the ionizer and ensuring that it’s shut off before you get home. Neither of these air purifiers connects to a router to give users control from faraway places, making the timer the only method of shutting off the machine when out.

Conclusion: Since managing these air purifiers can only be done by pressing buttons on their control panels, the timer is the only way to ensure that the appliance doesn’t run for longer than intended. The MA-14 is the only Medify purifier of the bunch that doesn’t come with a timer, but since it lacks an ionizing feature, it’s not that big of a deal.

MA-14 and MA-112
The M-14 and MA-14 and -112 air purifiers, despite their vastly different cleaning capacities, have an extremely similar design. Their air intake slots are located on top of the unit which allows them to snatch air from any direction before passing it out through a front-facing panel. This design allows you to place the air purifier virtually anywhere you’d like, even in the middle of the room, since it doesn’t need to face a particular part of a room to take in the most polluted air.

MA-40
The Medify MA-40 has a more traditional design – the intake is found on the back while the air outlet ducts are located on the front. This design forces users to search for the ideal spot to place the MA-40 since air enters the purifier in only one direction.

Conclusion: Finding where the place an air purifier can be one of the trickiest parts of owning and using one. The MA-14 and MA-112 eliminate most of the guesswork by having a top intake which snatches airborne particles from every direction, whereas the MA-40 is a one-way-in sort of purifier.

MA-14
What’s ironic about the Medify MA-14 is that even though it’s meant to be used in bedrooms for children, it does not have a child lock to prevent kids from tampering with the settings. Without smart sensors or a timer function, your child could end up turning the device on or off whenever they want.

MA-40 and MA-112
The MA-40 and -112, which are more appropriately placed in high-traffic spaces like living rooms and kitchens, come with a child lock system. Curious toddler fingers will be unable to change the fan speed and timer settings, letting the air purifier run undisturbed for several hours.

Conclusion: Any feature that stops children from tampering with the device’s settings is a major plus in our book. The missing child lock system in the MA-114 requires users to check on the purifier more frequently to ensure that it’s running properly.

When it comes to air purifiers, bigger may not always be better, especially if you just need a simple device to keep the air clean in single rooms or tinier parts of your home. However, as a large air purifier, we feel that the MA-112 offers the most bang. It’s far from being the most convenience or effective air purifier on the market, but it’s worthy of mention.

Once again, the “right” air purifier depends on how large (or small) of a room to clean. The MA-40 and MA-112 from Medify can clean larger spaces but are definite overkill in rooms where the MA-14 would work best.