Robotic vacuum cleaners have taken over the way we keep our floors clean of grit and debris. No longer do we need to push around heavy uprights; instead, a robot vac will patrol your floors to pick up whatever food you or your pets dropped onto the floor. Back in the day, our choices of robot vacs were limited, but today, we see an increasing number of emerging brands.

As reviewers, it’s our job to find out which robot works best, whether it comes from a well-known brand name like Xiaowa or a relatively new contender like Lambot. Today, we’re pitting the Lambot A1 head-to-head against the market-tested Xiaowa Roborock E35 to see which of these disc-shaped bots deserves the throne.

Lambot
Suction power refers to how much airflow passes through the robot’s inlet. A higher suction power rating means the robot will be more capable of cleaning hard and carpeted floors. The Lambot is rated at 2,200 Pascals, which is just slightly above the industry average.

With this, you can realistically expect the Lambot to clean medium-pile carpeting and pick up stray strands of pet hair.

Roborock
The Roborock has a slightly weaker intake of 2,000 Pascals, but this is not something you should worry about. With this much cleaning power, the Roborock is equipped to handle small and even certain pieces of large debris in one pass.

Conclusion: A 200-Pascal difference does mean a lot, especially when you consider that both of these robots come with identical brushes (side and main). Technically, the Lambot should work better than the Roborock at cleaning carpeted floors, but in reality, the difference is insignificant and almost unnoteworthy.

Lambot
The Lambot uses an LDS Navigation system. The built-in sensor scans up to 4,000 times in an 8-meter radius to create a digital layout stored in its onboard memory. Every time the robot begins the cleaning cycle, it will access the map and create the most efficient cleaning path to cover a wider area on less power.

Roborock
The Roborock uses similar system to navigate the floors of your home. The robot goes through your home in a Z-pattern while a series of sensors create a digital map of where the robot has gone. Once it’s covered an entire area of your home, it cleans along the edges to finalize the room’s map. It will clean up any leftover spaces it missed during this map-creation phase. The next time it needs to clean that room, it will access the stored map and plan out the most efficient cleaning path. The Roborock does this for every room it has access to.

Conclusion: We find that both systems, despite their differences, actually worth rather similarly to one another. There are a few hiccups in navigation and making multiples passes over the same area, but they are few and far in between.

Lambot
A mopping feature alongside standard vacuuming has become the latest trend in the robotic home-cleaning appliance world. The latest and greatest robots can do both to give your floors double the cleanliness. As you would expect from the budget-friendly Lambot, mopping is unavailable, and you’ll have to take a wet-mop to your floors by hand.

Roborock
However, the Roborock, despite being one of Xiaowa’s more affordable models, can both vacuum and mop. Best of all, the E35 is made to do both simultaneously! While the frontend of the bot sweeps and suctions up dry debris, the backside’s wet cloth gently wipes your floors to pick up any pieces of dirt and even light spills.

Like most robots, the Roborocks’s double-cleaning feature is not yet perfected, and it may end up moving sticky spills around rather than wiping them away.

Conclusion: The real question is whether it’s worth investing in a robot that has a “mopping” feature but does not do the job perfectly? In our opinion, at least in the case of the Roborock E35, it is. You’ll have a difficult time finding a vacuum-mop bot that can do both simultaneously in its price category.

Lambot
Smarter robots can adjust its suction power based on what surface it’s currently treading on. When it walks on carpeting, the robot will automatically switch to max or deep clean mode the pick up any embedded pieces of debris. Sadly, the Lambot does not come with this feature.

Roborock
The Roborock, on the other hand, does. The E35’s suction power adjusts seamlessly between standard and max power mode when it steps on and off carpeting. If you have wall-to-wall carpeting, then the robot will automatically switch to the highest cleaning power throughout its vacuuming cycle. This, of course, drains more power per second.

Conclusion: This is an extremely handy feature to have for those who do not have wall-to-wall carpeting. With this mode activated, there’s no waste of power – it activates whatever mode it needs to get the job done in a single pass. As for the Lambot, you’ll need to manually choose which cleaning mode to turn on, which can be quite annoying over time.

Lambot
Several factors can affect the maximum runtime of a robotic vacuum cleaner. The first of which is the size of the battery. The Lambot comes with a large 5,200-mAh battery that supplies up to 150 minutes of continuous cleaning per charge.

Roborock
The Roborock also draws power from a 5,200-mAh battery, but it can provide up to 180 minutes per charge. The difference is in how power-efficient its navigation logarithms are, as well as its anti-collision and -fall sensors. Essentially, the Roborock is less energy-hungry than the Lambot while also being able to do a lot more.

Conclusion: Vacuuming, mopping, and better battery life? There’s no reason why the Roborock should not be placed at a higher level than the Lambot. With an entire half-an-hour of extra cleaning time, the Roborock can vacuum an entire bedroom and more before making a beeline for its charging dock. Speaking of which…

Lambot and Roborock
Both of these robots are equipped with auto-recharge and resume functions. When their batteries are running out of power, they’ll head straight to their charging dock to refuel. You don’t need to worry about commanding the robot to get back to work – when it’s done charging, the auto resume feature takes over, instructing the robot to pick up where it left off. This means fewer repeated passes and a ton of convenience.

Lambot
When it comes to vacuuming, the only filter that’s designed to handle the smallest, most annoying particles and debris is True HEPA. The Lambot comes with a replaceable True HEPA Filter that traps particles as small as 0.3 microns up to 99.97% of the time. If you suffer from pet allergies, seasonal allergies, dust mite allergies, or simply don’t want the robot to shoot dust back into the air, then you need a bot with True HEPA. There’s no substitute on the market.

Roborock
The Roborock comes with a high-efficiency E11 filter that traps up to 99.2% of dust. The difference between HEPA and E11 may seem minute, but when you’re dealing with millions of microscopic particles and organisms, a little can mean a whole lot. The good news is that the Roborock E35 is compatible with True HEPA Filters, but you need to purchase them separately.

Conclusion: If you don’t suffer from allergies, then the E11 filter that comes with the Roborock should suffice. However, we’d still recommend purchasing True HEPA Filters for its enhanced particle-trapping performance. The Lambot comes with a HEPA filter pre-installed – all you need to worry about is replacing it when the time comes.

Lambot and Roborock
One of the major reasons why anyone would want to own a robotic vacuum cleaner is for the convenience. Nothing can make the robot more user-friendly than remote controllability. By downloading the LAMBOT Smart App or the Mi Home App, you can program different cleaning schedules, set up specific cleaning zones, and command the robot to start or stop with a tap of your phone’s screen. If you have Amazon Echo or Google Home, you can also shout orders at Alexa or Assistant to tell the robot what to do. The future is now!

And the Winner is…

Hands down, the Roborock wins this battle. Its mopping ability alone is enough to put the Lambot in a tiny, disc-shaped grave, despite it not being the most effective mopping robot out there. We love the simultaneous vacuuming-mopping of the Roborock E35, and if you have particularly messy pets and/or children, you undoubtedly appreciate this feature.

That’s not to say the Lambot is a bad robot –, if you live in an apartment with fewer rooms and less carpeting, then the Lambot might a pretty good fit. It’s just that the Roborock’s superior navigation, automated suction adjustment, and compatibility with True HEPA Filters would benefit anyone, anywhere. 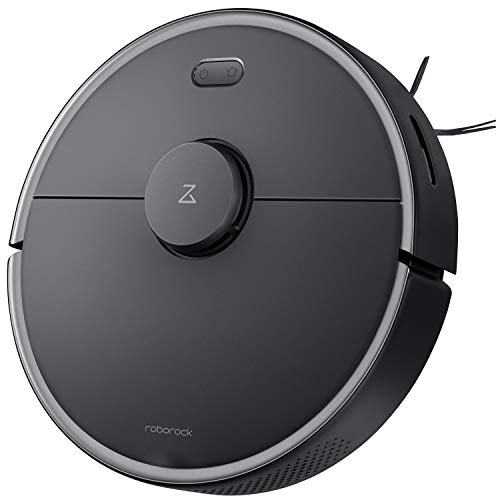