Dead leaves, algae, and dirt are some of the most common pollutants floating in or residing on the lining of your pool. Sure, you can go the manual route and pull them out with a pool scraper or skimmer, or you can have a robot do your bidding while you relax in the shade with a glass of lemonade.

When it comes to robotic pool cleaners, there’s one brand that everyone looks to: Maytronics. Their Dolphin Oasis Z5i is one that has impressed pool owners ever since it first entered the market last year and remains relevant and on top to this very day. Below, you’ll find everything you need to know about the Z5i and what it has to offer.

There’s no point beating around the bush: the Z5i is a bit on the costly side, but it’s worth every single penny. As a high-end model, it promises to do more than just simple cleaning, and it definitely delivers. 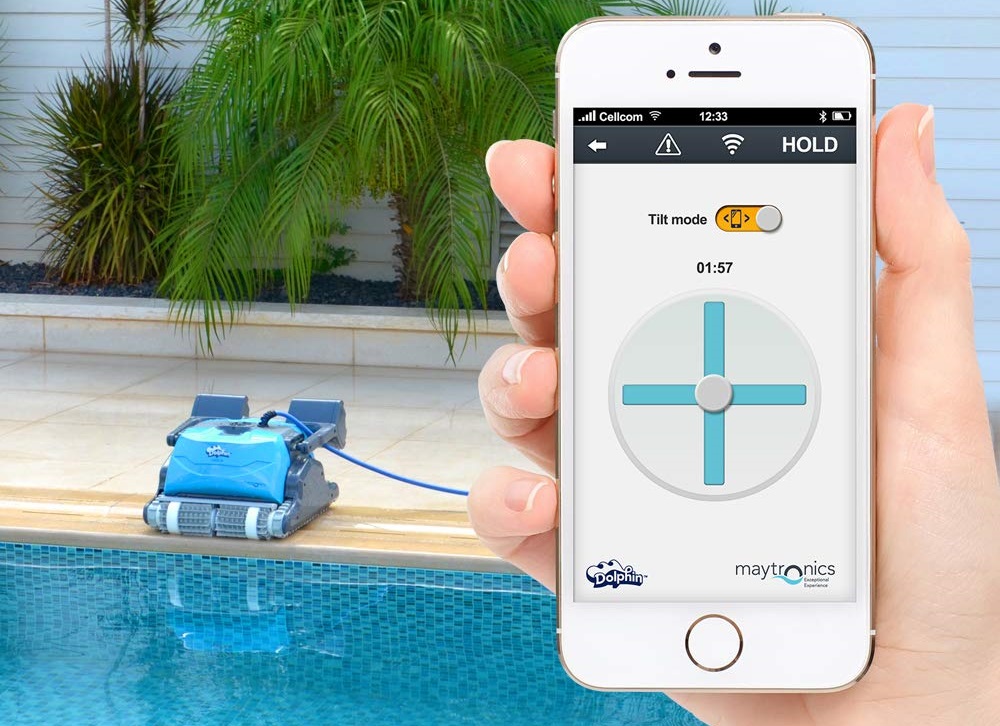 The Z5i is an investment that pays for itself over time with thorough scrubbing, vacuuming, and filtering. With the Z5i on hand, you can say goodbye and best wishes to professional pool cleaning services.

The first thing worth mentioning about the Z5i is its dual motor setup. Both motors work in tandem to drive the robot across slippery, algae-caked floors; glide effortlessly over most obstructions; and propel the robot vertically for waterline scrubbing. No surface of your pool’s lining will be left untouched by this magnificent bot.

The Z5i uses two brushes for double the scrubbing. Then, a powerful vacuum sucks up all of the loosened debris and passes it along with up to 4,500 gallons of water every hour through two filters – one for fine and one for coarse debris.

The separation of fine from coarse is necessary to ensure that your pool is as crisp and as free of gunk as possible. If, for instance, the Z5i were equipped with a single fine-mesh filter, it would soon become clogged, causing the collected mess to settle onto your pool’s base.

When all is said and done, you’ll need to pull the robot out of your in-ground pool the manually discard the filters’ contents. The 24-pound robot can become waterlogged, but as soon as it surfaces, all of the water gushing out, returning the robot back to its original 24-pound state (plus the weight of the accumulated debris).

Gets the Job Done with CleverClean Technology

How exactly does the Oasis Z5i know what to do? Simple: with super-complicated navigation software known as CleverClean Technology.

This is Maytronics’ most advanced mapping software that uses a series of sensors to create a digital map of your pool. The Z5i then creates the most efficient cleaning path based on its surroundings, thereby reducing how long and how much power it takes to clean your pool almost entirely. Obstacles be darned – nothing can get in the way of Z5i’s CleverClean.

You’ll also notice that the Z5i sits atop two tracks instead of four wheels. The tracks provide the extra traction needed to cling onto the lining of your pool, ensuring it doesn’t flip over while at work. There’s practically nothing that can stop this robot from doing a job well-done.

Perhaps the most notable feature, other than its dual filters, tracks, and motors, is the 360° swivel cord. This ingenious design allows the robot to twist and turn underwater without causing damage to the cord’s wires.

In addition, it keeps out of the suction’s way so the Z5i doesn’t accidentally choke itself while submerged. The power cord allows the robot to travel freely in pools of up to 50 feet in length.

To increase the convenience of using the Z5i, Maytronics installed a programmable scheduler for all seven days of the week. All you need to do is leave the robot in your pool and it’ll automatically begin its cleaning cycle on the selected days. Nothing could make life easier.

No robot is perfect and the Z5i is bound to miss a few spots here and there. If it somehow misses a spot (typically on or around steps), you can connect your phone to the robot by using the downloadable smartphone app. Using Bluetooth, you can manually guide the robot to where it’s needed.

Granted, the controls are a bit clunky and awkward, but you’ll barely ever need to use this feature due to the almost-impeccable cleaning performance and navigation.


Dolphin Oasis Z5i: Should I Get It?

If you’re looking for the best way to clean your in-ground pool without the hassle of confusing buttons and programmable features, then the Dolphin Oasis Z5i is an excellent option. Two scrubbing brushes, two filters, and two motors packed in one lightweight robot with near-perfect navigation – what’s there to not like?

The Best of SmartHomes in Your Inbox!