Why drag around a pail of dirty soapy water and a heavy mop when you could harness the awesome dissolving power of steam? Steam mops are slowly taking over the floor-cleaning game with their environmental-friendliness and chemical-free cleaning abilities. And when we think of steam mops, there’s one brand that comes into mind: Bissell.

The Bissell PowerFresh Deluxe Steam Mop 1806 is arguably one of the best steam mops on the market today despite being released nearly four years ago. In today’s post, we’re going to see what exactly makes this one of the most favored steam mops today.

Bissell knows its way around steam mops so you can expect some pretty fantastic cleaning results from the 1806. It works similar to other models by releasing steam into a microfiber pad, dissolving sticky stains while also killing more than 99% of germs. The microfiber pad picks up dirt and grime, and your floors are left looking as spotless as the day you got them installed.

It’s worth noting that the 1806 does not have a steam on-demand trigger but instead shoots a steady stream of it constantly when plugged in. Ultimately, this reduces how much control you have over the tool, but that’s why Bissell included…

Instead of blasting your floors with as much steam as it releases, users have the choice to alter how much or how little steam is used. The 1806 has two speeds—high-speed for the stubbornest stains and low-speed for general, everyday cleaning.

The speed settings can be found on the control panel right below the on/off button.

What’s great about the 1806 is that it doesn’t leave you hanging for five to 10 minutes at a time. It comes with a quick onboard boiler that heats 16 fluid ounces of water beyond boiling point in 30 seconds. On the lower speed, you get up to 15 minutes of uninterrupted sanitizing power.

Plus, refiling the 16-fluid-ounce tank is a breeze—simply lift the latch and poor water directly into the tank. Spend less time fussing with the tool and more time working.

What’s even more amazing about the 1806 is that you can detach the mop head (pedal located behind the mop head) to turn this tool into a long handheld unit with a brush at the end. On SpotBoost Brush mode, the rough bristles combined with steam can remove whatever stain the microfiber pad is unable to remove.

Afterward, reattach the mop head and wipe the stain away. The SpotBoost Brush will come in handy when cleaning tile grout.

What happens when you need to clean up after your pet? Steam can do a great job at sanitizing your floors, and hopefully, you won’t need to mask any odors (though this is highly unlikely). What you can use is Bissell’s Scented Boost discs; they pop into the mop head and release a fragrant scent when heated.

The Scented Boost Discs are sold alongside the 5948 Deluxe Mop Pad kit.

One of the first things we noticed was that the 1806’s power cord is extremely long. This makes working in single and even multiple rooms even less of a hassle since we didn’t need to unplug the device too frequently.

There’s also a handy hook on the handle where the 25-foot power cord wraps safely around.

Putting the unit together is nothing. Basically, you just need to attach the mop head to the body—a clicking sound will indicate that the mop is secured. Next, the handle attached onto the body with a single screw (screwdriver not included).

After that, just dump some water in the tank and let the boiler do its thing.

The 1806 isn’t just about performance, but it looks just as great as it cleans. On an empty tank, the 1806 weighs a mere six pounds (even less in SpotBoost Brush mode). It has a swivel neck that reaches around furniture legs without needing to twist your arm and shoulder.

The 1806 is also super-compact so finding a place to store it won’t require godlike Tetris skills.

Verdict: Should I Get the Bissell PowerFresh Deluxe Steam Mop 1806?

If you’re looking for a user-friendly steam cleaner that works like a charm, then the Bissell PowerFresh Deluxe Steam Mop 1806 is your guy. Its super-quick boiler heats 16 fluid ounces of water beyond boiling in just 30 seconds, but the brightest feature is the SpotBoost Brush for cleaning tiny, concentrated stains. This is a fantastic steam mop that definitely belongs in your home. 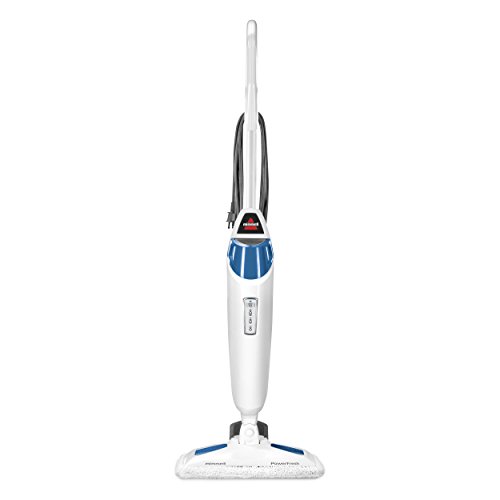