Crawlspaces and basement or some of the most humid parts of a home. It may seem pointless doing anything about it since they’ll end up as humid as ever during certain times of the year, but the longer you ignore it, the worse the situation will become. Mold thrives in moist environments, and it has no problem spreading to other parts of your home. So yeah, that tiny patch of mold growing on your basement walls can creep their way to your living room.

This is where dehumidifiers come in. the AlorAir 198PPD Basement/Crawlspace Dehumidifier is one of the beefiest models currently available. With this much power, you can ensure that your home or place of business will be as free of sweat-inducing moisture in the hot summer months.

For our readers living in extremely humid parts of the globe, there’s one very good reason why the AlorAir can become your best friend at summertime. This device is designed to remove up to 90 pints per day (PPD) in rooms as large as 2,600 square feet at AHAM. This dehumidifier is Energy Star certified, consuming only 6 kilowatts of energy per hour. Best of all, each kilowatt removes 6 pints of water

Your establishment may require varying levels of humidity for certain purposes. Whatever the case may be, you can rest assured that the Sentinel can leave the room as humid or as dry as you desire. This dehumidifier can be set to anywhere from 35% to 90% relative humidity. This is the optimal dehumidifier for large research labs as well as basements and crawlspaces.

The Hot Gas Valve Defrosting System inside of the Sentinel prevents the coils from frosting over during the wintertime. This ultimately keeps the coils from premature failure, extending the life of this dehumidifier far beyond its 5-year limited warranty.

While we’re talking about the coils, it’s also important to note that the coils are coated in epoxy which prevents corrosion. Feel free to turn on continuous mode and let the machine run for hours or days at a time. The prolonged moisture to water vapors will do nothing but tickle the epoxy coating, leaving the coils untouched and functioning properly for several years.

Perhaps the most useful feature of the Sentinel HDi90 is its built-in water pump that can force condensed water vapors through vertical spaces. No longer will you need to rely on a separate drip pan to collect the built-up moisture. Instead, secure the 5-meter drain hose onto the connector with the included nut, turn the pump feature on, and let the Sentinel handle water disposal for you.

The AlorAir 198PPD Basement/Crawlspace Dehumidifier (Sentinel HDi90)is equipped with a remote control system and duct system. The remote control system lets you access and monitor the 198PPD/Hdi90 from afar. This is a useful feature for those who don’t have all day to push buttons on the control panel. As for the duct system, if you’d like to relocate moisture to another part of your home, simply connect a duct hose and direct it towards wherever you’d like. These features are only available by purchasing the remote control and dust hose separately.

The Aprilaire 1820 Dehumidifier is another admirable machine that snatches excessive moisture particles from the air, but it’s not on the same level as the Sentinel.

The Aprilaire is designed for crawlspaces and basements of up to 2,200 square feet with a maximum water-removal rate of up to 70 PPD. These are excellent figures for home-use, but for industrial purposes, you may need to stick to the Sentinel.

One thing these dehumidifiers have in common is their anti-corrosive coils. The Sentinel keeps its coils protected from destruction is by an epoxy coating. The Aprilaire, on the other hand, uses aluminum coils which are naturally resistant to corrosion in its natural state. Both methods of warding off rust are great and maintain their respective dehumidifier’s functionality for more than five years.

One advantage that the Aprilaire has over the Sentinel is Wi-Fi access. By connecting to the Aprilaire to your home’s router, you can gain remote access and monitor the dehumidifier’s status via your smartphone. This is extremely handy and makes the remote control system almost unnecessary.

In every other regard, the two are alike. They both feature duct systems that let you move moisture from room to room. They also have built-in pumps that shoot water vertically through windows. And they can both be hardwired to your building’s existing HVAC system.

Overall, they are both excellent dehumidifiers for industrial use or for home basements and crawlspaces. Deciding on one or the other is a matter of determining whether 400 extra square feet of area coverage and 20 PPD of water removal is all that crucial.

Here’s a model that puts the high 90-PPD water removal rate. Of course, that’s assuming you don’t get one of the poorly built models coming out of the Dri-Eaz factory. 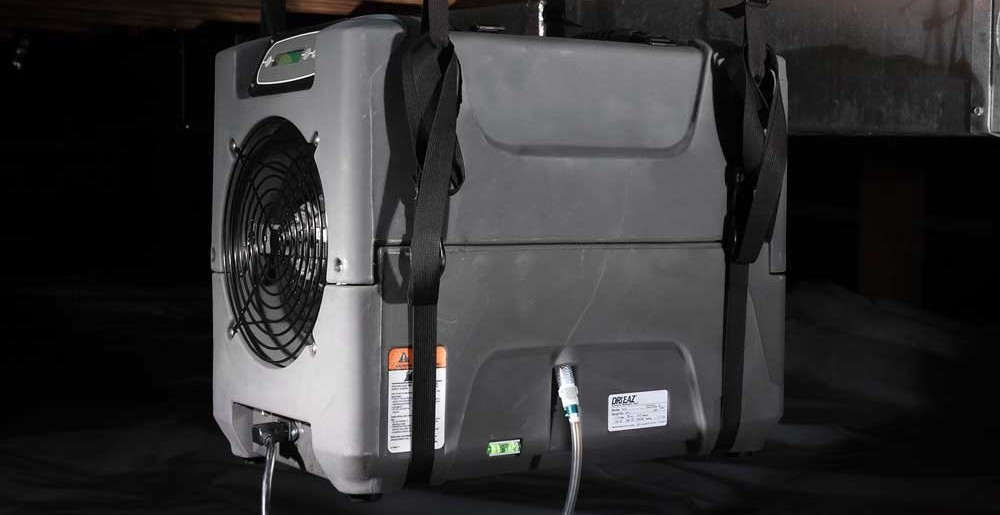 This is a commercial-grade dehumidifier that’s designed to tackle the largest of spaces, including home basements and crawlspaces. It can tackle spaces from anywhere between 2,500 and 4,000 square feet. But the huge area coverage capacity isn’t the PHD 200’s main selling point.

This unit does about is about half as efficient as the Sentinel in terms of water removal. On a good, humid day, the PHD 200 can remove up to 48 PPD, something that really makes us question whether it works in large 4,000-square-foot rooms?

The PHD 200’s relative humidity allowance can be set anywhere from 40% to 90% which is only a 5% minimum difference with the Sentinel, so you’re really not missing much.

But there is one huge drawback with the PHD 200 – the operational temperature range. The Sentinel is designed to work in places that reach -2°C. As for the PHD 200, it stops working a room is less than 7°C. There is no heated coil system that prevents the coils from frosting over, so during the winter or late autumn, the PHD 200 becomes an extremely expensive paperweight.

Let’s end off on a high note. Even though the PHD 200 has had some ups in downs with different customers, their customer support is always more than willing to lend an ear and a helping hand. This dehumidifier is protected by the a 6-year limited warranty.

The Dri-Eaz F413 is a compact dehumidifier – much smaller than the Sentinel – but offers an astounding amount of dehumidifying power. For commercial and residential use, this Dri-Eaz is probably the safest best to get.

Firstly, the F413 is designed to operate in rooms as large as 7,000 square feet, which is more than twice the max capacity of the Sentinel. But the larger the room the F413 is in, the less water it removes per hour. At its peak performance, it can remove up to 51 PPD of water at AHAM. But its compact size more than makes up for its lower PPD rate.

The F413 comes with a 40-foot drain hose (included). Simply connect the drain hose to the tube found on the base of the unit and the machine will expel water without the need for drip trays. The built-in pump can force water out vertically up to 20 feet above the unit (straighten any kinks in the hose).

Like the PHD 200, this Dri-Eaz unit has a relative humidity allowance of between 40% and 90%. It also works optimally in temperatures above 7°C. To keep it running in fall or winter, you will have to introduce heat back into the room until its internal thermostat reaches the minimal temperature requirement.

Overall, we think that the F413 is one of the best dehumidifiers available, considering its compact design and tremendous area coverage. But the thing that still makes the Sentinel better despite its smaller coverage capacity is the heated coil system.

The final comparison in this article is between the Sentinel and the MOUNTO Crawlspace Dehumidifier. Like the model mentioned earlier, this is a compact unit that’s built for both small and large rooms. But it packs a beefier motor that makes it more adept at removing more moisture in large spaces like basements.

The MOUNTO is rated at 80 PPD for rooms as large as 7,000 square feet at AHAM. The PPD-to-coverage ratio is extraordinary and swamps that of the Sentinel. On top of that, this unit is akin to the F413 in size and design. The MOUNTO is a great compact dehumidifier for large and small rooms, and it hardly takes up any space at all!

There are a couple of disadvantages of the MOUNTO when compared side-by-side with the Sentinel. For instance, the unit’s relative humidity allowance of between 40% and 90% – identical to the Dri-Eazs. Although the 5% different won’t mean much when looking at the larger picture, but in labs or commercial establishments where every percent counts, it might be a deal-breaker.

Furthermore, the MONTO is set to operate in rooms of 7°C or hotter. Too low and it’ll shut down automatically to protect its coils from freezing over. If you remember, the Sentinel has a heated coil that allows it to work in freezing temperatures.

Reviews of the MOUNTO have been mixed, but hardly anybody has complaints about its performance. Most criticism of the MOUNTO is directed at the lack of an instructions manual in the box, leaving users to learn how to use it online or winging it entirely.


Dehumidifiers reduce the humidity levels at home, making it less hospitable to allergens such as dust mites, mold, and mildew.

Shop the Best Dehumidifiers on Amazon >>>